The call of nature 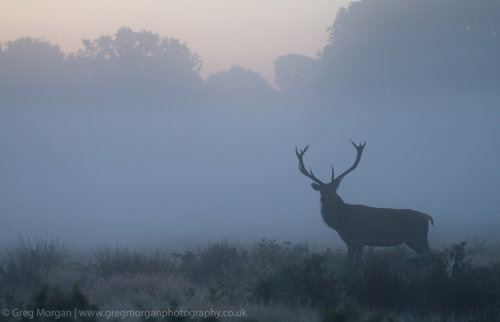 Even though I’d set my alarm for 4.50am, I was already awake 10 minutes before it went off. I got out of bed and looked out of the window. There was no hint of approaching dawn yet in the sky, but I could tell it was going to be a beautiful, crisp, cloudless morning – with perfect misty conditions a distinct probability. I imagined walking through the gates of Richmond Park in less than two hours time, alone except for the creatures that call it home, and the odd keen cyclist, and smiled at the thought.

For me one of the signs that autumn has arrived is when the red deer rut starts. As October approaches and the nights draw in, the stags’ testosterone levels sky rocket and they become slaves to a single impulse: the urge to mate - and by extension to defend their hard-won mating rights.

Each mature stag will have bulked up in advance, knowing that while the rut is in full swing he won’t have much time to eat – it’s not unusual for a stag to have lost 20% of his body weight by the time the rut draws to a close. He will strengthen his neck muscles by raking his antlers against the ground, which both increases the likelihood of winning fights and also has the effect of deepening his voice. This means his calls will carry further and will be more impressive to females - and intimidating to other stags. For the same reason he will also sometimes festoon his antlers with bracken and grass – often while urinating on himself to spread his scent! This serves to advertise his virility, as other deer can detect the testosterone levels in his urine, which rubs off on the foliage as he patrols his territory. I can testify that stag wee is a potent smell – and surprisingly not entirely unpleasant !

This behaviour brings with it fantastic opportunities for wildlife photographers. The deer that live in parks are a lot more approachable than wild deer, and it’s somewhat easier for us London-based photographers to get to Richmond Park than to the Scottish highlands, or Exmoor!

Driving through London at 5.30am on a Saturday morning is a lot less stressful than during the day, and I was parking the car a mere 50 minutes after I’d set off. I was thankful I’d packed a wooly hat, and that my gloves happened to be in my coat pockets, as it was a chilly 6C.

As I made my way through the park, the spectral shapes of deer materialised on the periphery of my vision, melting away in the dark as I passed. Rafts of mist had settled in the hollows on either side of the road, which wound upwards towards the brow of the hill. Occasionally the deep resonant bellow of a stag reverberated in the cool air. 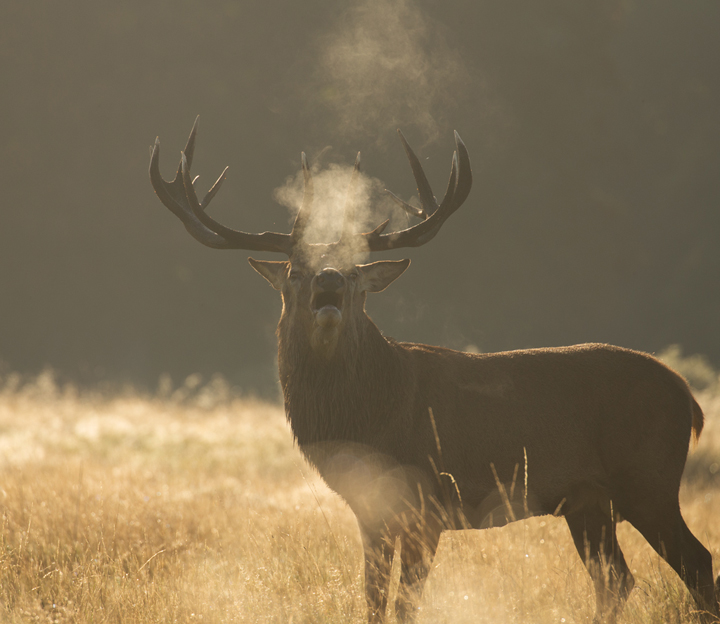 I left the road and followed a bridle path towards an area that had proved fruitful in previous years. The open grassland gave way to patches of tall bracken, with intermittent stands of trees. The frequent calls of a lone stag gradually amplified, until I could made out his shape in the gloom – head thrown back and voicing his challenge.

I took some shots with the stag small in the frame and silhouetted against the mist. Keeping a respectful distance I then followed him into the woods where he began thrashing the bracken with his antlers, eventually emerging with a nice foliage headdress! Unfortunately the light was pretty weak and uninteresting, so I knew those shots would be nothing special.

The stag moved out of the woods and into a meadow, where a group of hinds were grazing. As the sun rose higher in the sky I concentrated on taking semi-backlit shots of the stag, his breath forming clouds of steam which glowed against a distant backdrop of dark trees, until the light became too harsh.

As I trudged the mile or so back to the car, my feet squelching in my boots (as a result of tramping through dew-laden bracken), I reflected on a precious morning spent in nature, yet only a stone’s throw from busy city streets. Waking up at an ungodly hour, and the 90 minute drive home through daytime traffic seemed a small price to pay.