Close encounter of the woodpecker kind 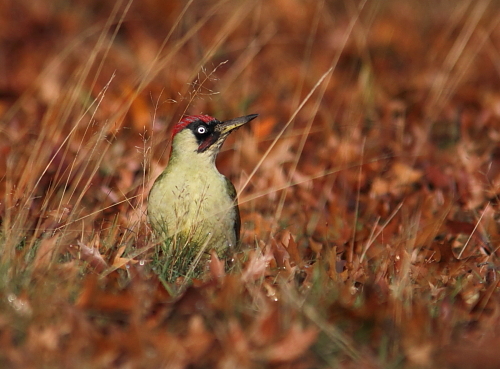 I finally took the plunge and bought myself a car. I decided that it would make wildlife photography a whole lot easier having my own transport - though my environmentalist side took some persuading! However, as I passed my test longer ago than I care to think about - and have driven only once since then - to say I'm a bit rusty is what you would call an understatement. Therefore I booked some refresher lessons a couple of weeks ago, and it was literally a case of checking with the instructor which pedal was the gas and which was the clutch!

So early yesterday morning saw me driving over to Richmond Park - without major incident I'm glad to say, other than a few wrong turns and no doubt some shaking of heads by my fellow motorists! I was hoping to catch some fallow bucks tussling with each other over breeding rights, as the fallow deer rut is now in full swing. Unfortunately the light wasn't great, although in those conditions I often try shooting at slow shutter speeds, aiming for a nice sense of movement which good light conditions normally won't allow. I did see some action, but as the fallow deer in Richmond Park tend to congregate in much bigger herds than the reds, it was impossible to isolate the combatants without interested spectators (both deer and human) spoiling the shot.

One of Richmond Park's other attractions (for me at least) is green woodpeckers - it is literally crawling with them. However, because they are naturally cautious birds, and spend much of their time on the ground grubbing around for ants and other goodies with their long beaks, I've always found them a challenge to photograph well. So I was pretty chuffed to have a close encounter with one of these beauties - and during a small window of good light to boot! I spotted this chap from across the road, and carefully manoeuvred myself closer - taking care to only move when he had his head down. I was then extremely fortunate that the woodpecker flew towards me, and carried on rooting through the leaf litter a mere 10 metres or so away. Annoyingly, the best view I got of him was just before he took off, when I managed to lose the autofocus and missed my moment. But I was thrilled nevertheless to spend a good seven or eight minutes observing this fascinating and charming bird.