All quiet on the eastern front 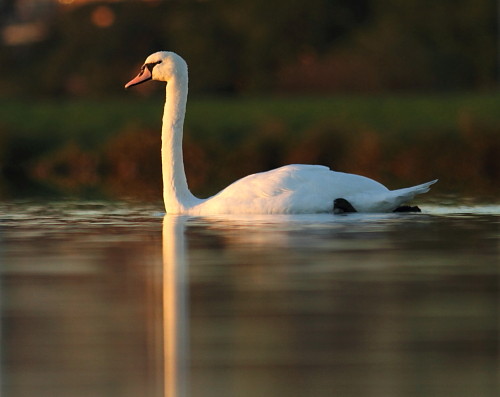 Thank heavens for autumn sunrises! During the spring and summer months down at my local patch in Walthamstow, I am usually a little frustrated at missing out on the best early morning light because opening time isn't until 7am. Once autumn is here however, I can stay in bed that little bit longer content in the knowledge that as long as I'm there for 7.30am I'm not missing anything I can photograph.

This morning saw me full of hope and excitement at the prospect of a second glorious morning in succession - though a damn sight colder than yesterday's schlep to Richmond Park! This was my first visit for a good three weeks, which added to the excitement. Unfortunately though, there really didn't seem to be that much going on. I was hoping for mute swans in flight, an approachable troop of my favourite long tailed tits, or perhaps an amenable kingfisher perching just long enough for me to fire off a few shots. In the event, all I managed was some shots of swans in the water, a few distant cormorants on the wing, and a dunnock who steadfastly refused either to hop into the light, or to sing while I was actually holding down the shutter release!

The kingfisher did show up a couple of times, but hung around for a mere three or four seconds on each occasion, so alas no shots were possible. Still, I suppose if wildlife was always thoroughly obliging, it would be too easy to take it for granted - and where's the challenge in that? So I'll content myself for now with dreaming of getting a shot of my kingfisher with a minnow in its beak, in perfect golden light and sharp enough to cut myself on. Maybe next time!