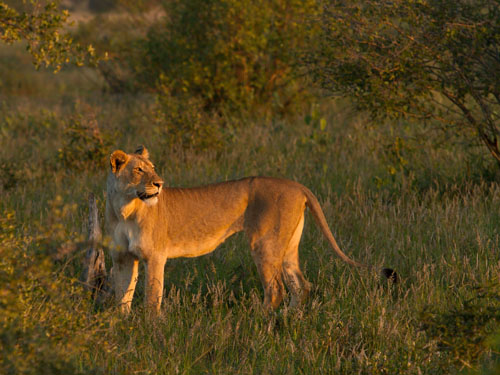 I recently returned from a two week photographic safari in South Africa. It really was the trip of a lifetime - you can see the shots I took in the African wildlife gallery. As this was my first visit to Africa I decided not to leave anything to chance. I therefore booked with a specialist photographic safari company called Wild4 Photographic Safaris, run by a chap called Stu Porter. It turned out to be one of the best decisions I've ever made - I had a marvellous time, saw loads of great wildlife, and got the shots I was hoping to get. Stu's approach was second to none in terms of knowing where the wildlife would be, the best time of day to get shots and positioning the vehicles in the best place to maximise the available light. There were only three photographers on the trip, which meant that we each had our own seat in the specially adapted vehicle. As well as being a great photographer and naturalist, Stu was an incredibly nice guy - if you are thinking of going on your own trip to South Africa I thoroughly recommend booking with Wild 4.

We spent the first two days at Tshukudu private big cat reserve shooting captive leopards, cheetah, lion cubs, caracal and wild dog, as well as wild elephant, rhino, crocodile and giraffe. Stu had loads of ideas for getting shots that were a bit different, including some night shoots using off-camera flash remote triggers.

We spent the next ten days in Kruger national park, at the Lower Sabie and Satara camps. We saw lions galore, and had four different leopard sightings as well as cheetah, hyena, elephant, white and black rhino, buffalo, hippo, kudu, waterbuck - I could go on! We also saw lots of bird species, including some spectacularly close views of five different eagle species. The highlight for me though was watching four lionesses stalk a herd of zebra - unsuccessfully as it turned out - for over an hour.

Since returning to the UK I must admit my motivation to get out with the camera has been a bit lacking. No doubt once I get into the swing of things it will return. I'm already thinking about a week in Mull in the autumn - watch this space...