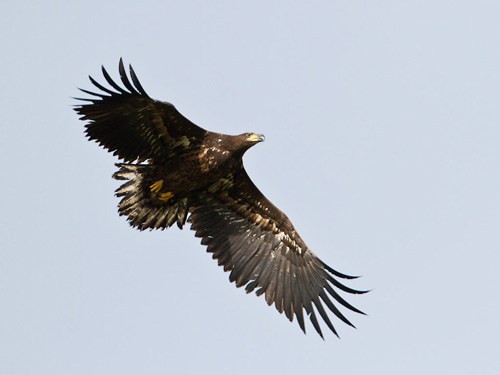 I've just spent ten days on the Isle of Mull on the Inner Hebrides, the best place in the UK to see the recently reintroduced white tailed eagles. These awesome birds are Europe's biggest eagle species, and have a larger wingspan than any other British bird - the females can measure up to eight and a half feet! White tailed eagles were persecuted to extinction in the early part of the twentieth century, but were successfully reintroduced on nearby Rum in the 1970s. The first successful fledging occurred on Mull in 1985, and there are now 15 breeding pairs on the island. They coexist with the more elusive golden eagles in relative harmony, though their penchant for taking the occasional lamb (usually those that have already died) does not endear them to the local farmers!

I was fortunate enough to have some close encounters with these magnificent raptors, though the light conditions were generally not ideal. I also missed out on the boat trips that run during the summer months, where fish are thrown overboard and some spectacular shots of the eagles picking them from the surface have been taken.

Mull is a paradise for birds of prey. In addition to the eagles I also saw hen harriers, kestrels, sparrowhawks and the ubiquitous buzzards - which are all relatively abundant. And plenty of otters and red deer also call the island home.