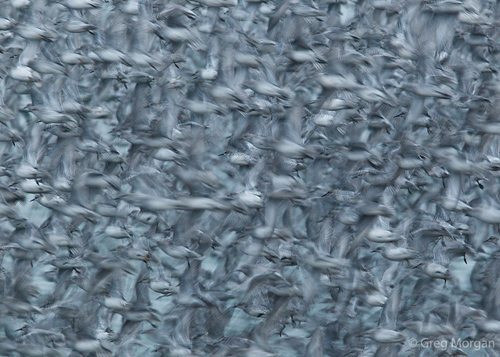 I recently spent a week on the north Norfolk coast photographing waders and barn owls. It was my first photographic trip to the English mecca for bird watching and photography. Although the weather wasn't great for much of the week, I was lucky enough to have at least some nice light in which to photograph the more common waders such as turnstone and redshank - although decent barn owl shots proved elusive. I have a real soft spot for barnies - there is something special, almost magical even, about them. I located a good spot near the cottage I was renting where a pair of barn owls could be seen most afternoons and mornings, quartering the meadow on the hunt for voles and other tasty rodent treats. It was a pleasure to watch these graceful birds in action all week, but slightly frustrating not to get at least one decent shot!

On the last day of my holiday I had arranged a visit to Snettisham RSPB reserve with my friend and fellow photographer Mark Smith. This coincided with a high tide - which invariably drives the large flocks of waders off the main beach and into the lagoons, where you can watch them at close quarters from one of four hides.

The day started badly - firstly I set off late, then managed to get lost, and when I finally found Snettisham reserve, I parked in the wrong car park. By the time I set off from the right car park I was a good 40 minutes behind schedule. I covered the mile and a half walk carrying all my gear in record time, but was rather flushed and out of breath by the time I reached the hide! I needn't have worried as most of the birders were on the beach watching the massive flocks of oystercatchers and knots - leaving just me, Mark and one other photographer with the hide all to ourselves.

The light was seriously gloomy as the sky was covered with a thick blanket of cloud. As the tide rose more and more knots flew in and began settling on a sandbank right in front of us. It was my first experience of being up close to a flock of birds this large, and it was pretty exciting to witness! The hide began to fill up with birders as more and more birds deserted the beach, but as the sun rose the light improved only marginally. I decided that this was no bad thing as it would allow me to shoot at a slow shutter speed - hopefully capturing the movement of the birds in a way that with a faster shutter speed would not be possible.

Suddenly, as if on some secret signal, the knot took off. The sound was astonishing as up to 10,000 birds all burst into the air within a few seconds of each other. All I could see through the viewfinder was a solid wall of knot. Shooting at ISO 1600 and 1/80 of a second the effect was almost abstract - like a magic eye picture. It paid to be ready, as the whole spectacle was over in about ten seconds, the flock wheeling further and further away before finally heading out to sea.

I was fortunate enough to have three of my shots featured in The Times alongside an article on 'bio-abundance' by one of my favourite journalists, Simon Barnes!