Midsummer magic on the Shetlands 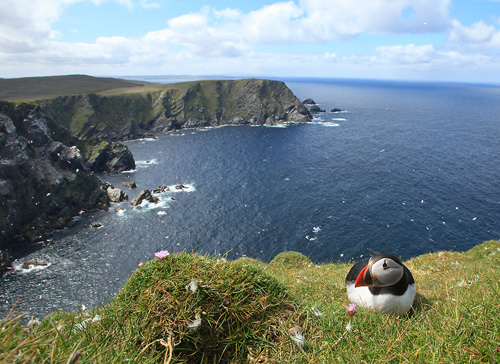 I've just spent a week in the fabulous Shetland Islands, the most northerly location in the British Isles (you can see a selection of my shots in the Shetland wildlife gallery). It was my first visit to these remote islands, whose craggy coastline provides the perfect breeding ground for hundreds of thousands of sea birds, as well as acting as a staging post for some rare and exotic migrants. At this time of year the days are long, and when I got home to London I was exhausted - but happy!

I spent the first three days based on the mainland, visiting the islands of Mousa and Noss by boat. On Mousa I got great close views of black guillemot, fulmar and great skua - or bonxies as they are known locally. Although there are only 14,000 breeding pairs worldwide, they are actually pretty common on the Shetlands, so it was easy to ignore these incredibly rare birds! They are characters however, constantly challenging each other with displays of wing stretching and calling - as well as buzzing the odd wildlife photographer if he unwittingly got too close to the nest!

Noss is home to huge colonies of gannets, as well as puffins, razorbills, guillemot, fulmar and arctic terns. Trying to photograph gannets on the cliff face from a moving boat in a force five wind is not for the faint of heart - or weak of stomach. I must confess that I lost my breakfast in the swell - but soldiered on in spite of the nausea!

On day two I visited the lighthouse at Sumburgh head on south Mainland where there is a large puffin colony. Most of the breeding birds were on eggs still, so no sand eels being brought back to feed the pufflings unfortunately. These charismatic and comical little birds really are the photographer's friend however - showing no fear of me at all, allowing for some great photographic opportunities.

For the next three days I was based on the island of Unst, home to the magnificent Hermaness nature reserve. A challenging mile and a half walk up to the cliff tops was rewarded by spectacular views of gannet, puffin and fulmar colonies. It was an absoloute haven for photography, and I genuinely didn't know where to point my camera half the time! After trying to capture fulmars flying into the stiff wind, I settled on my friends the puffins as my main subject. I was able to get a good variety of shots, using my whole range of lenses - from wide angle shots with the 16-35mm, to close-ups with the 500mm telephoto.

From my base at the Baltasound hotel I also photographed common seals hauled out on the pier, red throated divers, eider, red breasted merganser, whooper swans and a variety of waders.

One of the highlights of the week was seeing the extremely rare red necked phalarope on nearby Fetlar. There are only 25 breeding pairs of these little waders in the whole of the UK. We managed good views of a number of birds, which were generally very confiding - though unfortunately the light wasn't great. However, while waiting for the phalaropes to appear I managed to get some good shots of a pair of arctic terns in the rain that were probably my best shots of the whole trip.

All in all I had a terrific time on the Shetlands, and I will definitely be going back at some stage in the future. It has to be one of the best locations for wildlife photography in the whole of the uK.