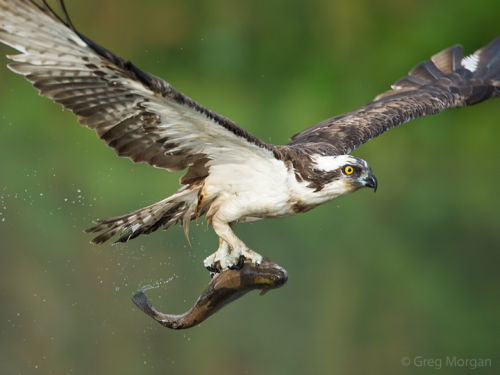 After a four month hiatus from photography while recuperating from a bad back, I've just returned from a very productive five days in the Cairngorms. My main objective was to photograph ospreys fishing, and I'm pretty pleased with the results. They are fantastic birds, and to just observe these large raptors, with their five foot wingspans, hurtling into the water is something to behold. This year's chicks have now fledged and the adult males are teaching them to fish, so there was some great action of the juveniles' first attempts at catching breakfast.

I had three early morning sessions in Gordon McLeod's hide in Aviemore. Although I wasn't over the moon about the 5am start, the early photographer captures the bird as far as fishing ospreys are concerned. Gordon has got a brilliant set up - the hide is actually an underground bunker, allowing photographers a low view across the tiny loch. Because the loch is so small, the ospreys are no more than 30 metres away when they hit the water. So it was a bit tricky not to chop the end of the birds' wings off using a 500mm lens on a Canon 1D mk 4 body, with its 1.3x cropped sensor. Low light levels called for high ISOs, but sometimes even at ISO 2000 I was only managing 1/80th of a second at f4 - let's just say the results were artistic!

We had good activity every day, with between four and seven hits. And in the downtime between the ospreys, there were redstarts and pied wagtails to photograph near the hide. I'd never seen a redstart before so was very pleased to get a chance to photograph this pretty little bird.

I also spent a morning with Neil McIntyre photographing red squirrels at one of his woodland feeding stations. Although it rained for the whole two hours, I managed to get some half decent shots of these charismatic little animals. The rest of the time I spent either clambering over slippery rocks on the river Spey to get some shots of a dipper, (though the light was terrible) or in the carpark at Loch an Eilen photographing a great spotted woodpecker that was visiting the bird feeders - I was chuffed to finally get a good clear shot of a woodpecker after many years of trying and failing!

You can see a selection of shots of ospreys taken on the trip in the Birds of prey gallery.