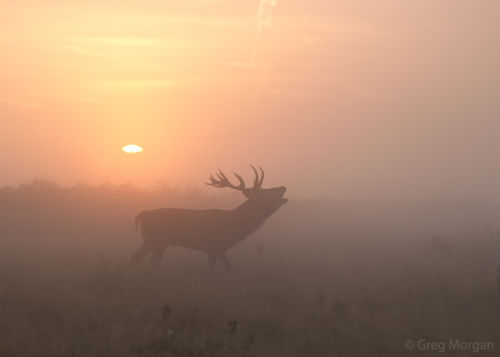 This morning I paid my third visit of the autumn to Richmond Park, as the red deer rut has just kicked off. On Monday I managed to get some decent shots of a stag looking faintly ridiculous with a big clump of bracken in his antlers, one of which was featured in The Guardian, and another on The Telegraph's website. But I was still eager to get better shots.

The forecast sounded really promising - a fine start with a chance of mist, which would be perfect conditions for the shots I've been after for a while - images of roaring stags, backlit against the early morning sun. My previous attempts had always been thwarted - either by the conditions, or else the uncooperative stags. So when my alarm went off at the ungodly hour of 4.45am, I was praying to the weather gods to look kindly on me for once!

After a quick bowl of porridge I was on the road. Fortunately the westway being unexpectedly closed didn't delay me too much, and I pulled up outside the park at a little after 6am. It was still more or less night time, with just the faintest hint of light beyond the horizon. I must admit it was a little unnerving walking through the park gates in near total darkness, and as I made my way along the road, the hooting of a tawny owl added to the spooky atmosphere!

As my eyes became accustomed to the dark, and as it began to get a little lighter, I could see mist all around me - bingo! Then the primal sound of a distant bellowing stag carried through the air. Without delay I headed to a high spot in the park, where I knew I'd be able to see the sun as it peeped over the horizon. Now, just to find some stags in the neighbourhood!

After a recce of the surrounding area I heard what I was after - my ears led me to two fine specimens in some nearby woods, who were intent on letting the ladies - and their rivals - know they were in town. The sky was now suffused with a gorgeous peach glow and was clear, except for a raft of cloud low on the horizon and a few stray wisps overhead.

The two stags were heading for an open patch, and soon they emerged from the trees, obligingly stopped every few yards to let out deep roars. Fortunately they didn't seem to mind me tagging along, though I was careful to keep my distance until they'd got used to and accepted me.

Suddenly the first fragment of sun broke clear of the cloud, as incandescent as a glowing ember. The stag I was focussing on stopped, sideways to me and in profile, tilted his head back and bellowed. As I pressed the shutter I got that very rare feeling for a wildlife photographer - that I'd nailed it! I checked the display and a big grin spread actross my face - get in!

I spent the next hour or so trying to get backlit shots of stags in the woods, silhouetted by the sun - amazingly everything seemed to come together, and I got some shots I'm really pleased with.

You can see some of the fruits of my labour in the Recent work gallery.