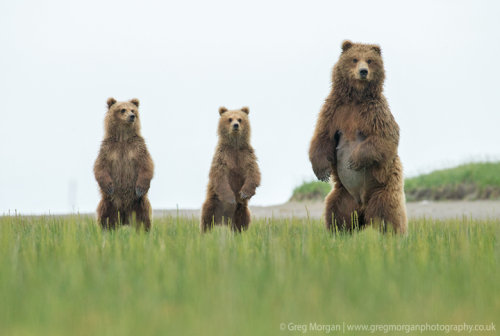 Alaska is home to over 90% of all the brown bears in North America. Coastal brown bears are the biggest of all the different brown bear sub-groups. Ursus arctos are the same sub-species as the grizzlies that live inland - but have grown bigger due to their rich seafood diet of clams and salmon. Fully grown males usually weigh 900-1200lbs, while females weigh 400-700lbs.

At this time of year the bears have recently come out of winter hibernation and have three things on their mind: to eat as much as possible in order to start bulking up before next winter; for mature males and cub-less females - to mate; for mothers with dependent offspring - to protect their cubs. While the males have already started to moult, the females and juveniles are still sporting nice thick fur - and so are extremely photogenic.

I booked myself on a wildlife photography tour, led by Marc Latremouille, to coincide with the bears congregating on the coastal area of Lake Clark National Park. I was hoping to capture images of mothers and cubs, males interacting with females and each other, bears set against the magnificent backdrop of the mountains, bears digging for clams on the tidal mudflats, and all (hopefully) in great light! I managed to achieve most of this, but my one regret is that we didn’t see any mothers with spring cubs. 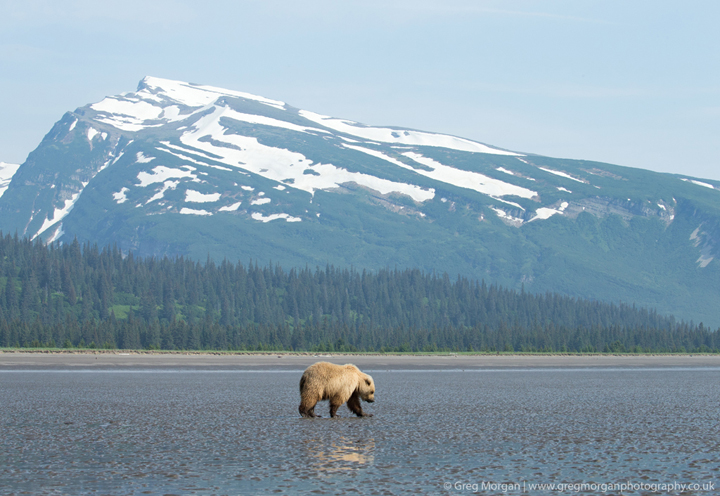 Marc was a good tour leader - enthusiastic, funny and happy to be out shooting at 6am and not pack up until 10pm. The other guys on the tour were great people and we all got along very well. The Alaskan summer brings with it extremely long days, and so we were able to shoot at all waking hours - in fact we could probably have started shooting at 5am until close to midnight if we’d had the energy, the nights were so short.

The bears of Lake Clark are generally habituated to people, and so this enabled us to get up very close and personal to them - sometimes a bit too close for comfort. We had several bears wander through camp (the Silver Salmon Creek lodge) in search of food, and by day six I was sufficiently used to this happening to almost forget there were bears within a few metres of where I was standing having a conversation with a fellow photographer! The guides who drove us around (in ATVs with trailers attached to the back) were armed only with pepper spray, and during my trip all of the bears were very well behaved around people. In fact there has only been one incident at Lake Clark in the last 20 years where a bear has attacked a person.

Shortly before the trip I bit the bullet and decided to buy a top-of-the-range Canon 1DX. While I was generally very happy with its predecessor, the 1D mark 4, one of its few weaknesses is its autofocus system - and the last thing I wanted was to miss any of the action because my gear couldn’t keep up. The other attraction of the 1DX was the fact that it’s got a full frame sensor, so image quality should be better. I was very happy with how the 1DX performed, and the AF proved extremely reliable. I invariably took both cameras out in the field - the 1DX attached to my 100-400mm mark 2, and the 1D 4 attached to my 500mm f/4. This set-up worked well, enabling me to cover most situations both near and far. I also took a wide-angle 16-35mm zoom which I got to use for the occasional landscape shot, plus one or two very close encounters with bears!

One bear in particular seemed to like being close to us - a three-year-old male nicknamed Blondie, due to his very pale fur. He had only recently become independent from his mother, and so seemed to be actively seeking out company - whether it be other bears or people. On our first evening we witnessed poor Blondie being chased away by a female bear with two-year-old cubs after she finally lost patience with his insistence on following them around - though it made for great action photography! 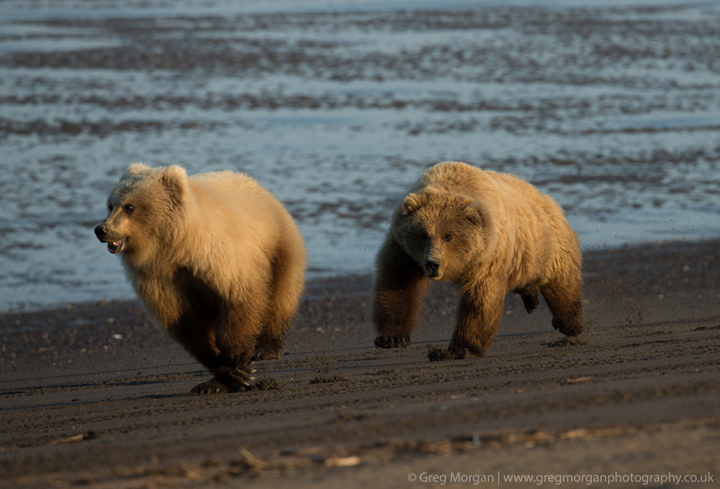 My highlight of the trip was probably day 3, when we had a great session with bears digging for clams on the mudflats at low tide, took an afternoon boat trip to a nearby island to photograph puffins, bald eagles and even a sea otter, and spent a magical 5 minutes watching two bear cubs wrestling together on their hind legs, in wonderful evening light. And this was despite me losing the contents of my stomach overboard as we sailed back to the lodge! All in all it was a thoroughly enjoyable trip and a great experience - and I definitely hope to return to Alaska one day.