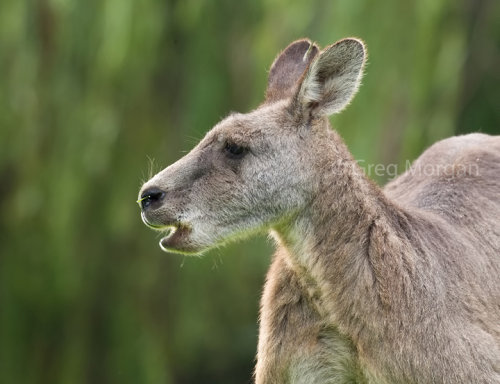 I’m currently en route back from a 3 week holiday in Australia, flying out of Melbourne. My trip combined seeing family, with doing some photography - in the end a lot more than I had planned - and I had a fantastic time on both fronts. You can see the wildlife photography highlights in the Australian wildlife gallery.

My eldest sister asked me to photograph the house next door (which she owns and rents out) for promotional purposes, while I was staying with her. So I packed the camera and tripod, as well as a 16-35mm wide-angle zoom lens, a general purpose 28-70mm zoom and my new 100-400mm mk 2 Canon L telephoto zoom. I learned quite a lot about aligning verticals, and ‘styling’ interiors while shooting the house with the smaller lenses - as well as disabling the mirror lockup while shooting long exposures on the tripod, at apertures small enough to give a wildlife photographer a nosebleed!

While accompanying big sis on her daily visits to the park with her wonderful dog Annie, I took along the camera and 100-400mm zoom to get some pics of the dogs interacting. I’ve never seen so many mutts in one gathering - sometimes 25-30 canines of all shapes and sizes congregated in the middle of the park, and the lens handled their dashing about very well, despite the chaos. Inevitably the local birdlife attracted my attention as well. While much of it was common or garden to Australians, the attraction of new species to a tourist like me was irresistible. So the ubiquitous magpie larks were never too boring for a few shots, and the marvellously-named willie wagtails were always a challenge. I was very impressed with the initial results of the new lens, which were very sharp.

After spending a quiet week in Melbourne, the whole family ventured south for a 5 day break on the Mornington peninsula. We stayed at a fantastic property on the very edge of the MP national park, in a town called Rosebud. I’d heard tales of eastern grey kangaroos venturing out of the park to graze on the back lawn, which I was very excited about. As no roos materialised on the first evening however, and as I usually wake up early, I made a vague plan to walk up to the national park at first light the next day, for a recce.

Lo and behold, when I got out of bed and looked out of the kitchen window in the morning there was a kangaroo grazing right by the deck. I crept out and began taking some shots - at ISO 1600 and about 1/40 second at f/5.6, as the light was still pretty gloomy. It was an old male with his right eye missing, so it took him some minutes to become aware of me. He didn’t seem particularly fazed by my presence however, and I spent a good 20 minutes lying on my belly on the dewy lawn hoping my dodgy back didn’t play up too much, before the roo hopped off.

So after recording a variety of portraits and grazing shots of Kyle (as my nieces christened him), I arrived at the park later than planned with the sun already up and set against a beautiful blue sky, alive with galahs, lorakeets, swallows and lots more bird life. I even saw a couple of distant wedge-tailed eagles. I managed to get some nice shots of what I later identified as a purple swamphen, as well as a pacific black duck paddling in the very photogenic dam, and some shots of dragonflies hovering.

We ended up having an extremely enjoyable time on the Mornington peninsula, including a delicious vineyard lunch for my sister's and her husband’s joint 50th birthdays. We saw other kangaroos in the park, and Kyle made a reappearance on the lawn on the fourth morning, and in better light. We undertook a day trip to French Island, where we hired some rather antique-looking bikes to get around - though the lack of suspension combined with the island’s sun-baked dirt tracks were rather unforgiving on the rear end. The koalas on French Island were, to quote my sister, ‘dripping from the trees’ - we saw 17 on the day!

However the wildlife highlight had to be an extremely close encounter with an echidna. My sister and brother-in-law spotted it while out for a stroll near the park entrance, and immediately called me. I hot footed it with my camera gear to where they were, and spent a patient hour waiting for the strange-looking creature (think of a rugby ball-sized cross between an anteater, an armadillo and a hedgehog and you’re not far wrong) to come out in the open where I could use the late afternoon sun to best advantage.

Eventually the echidna cooperated, and ended up approaching me to within a couple of feet, seemingly oblivious to my close proximity. It happily rooted around in the soil digging for ants and grubs right in front of me, so that in the end the only shots I could manage were closeups of its spines. What a wonderful encounter!

On the last day of our Mornington peninsula adventure we stopped off at a lookout on the coast. The light was dull and flat and the tide was in, so I decided to experiment with taking creative shots of the incoming waves breaking over the rocks, using slow shutter speeds. It was a fun half an hour, and while nothing immediately remarkable jumped out at me from the camera monitor, when I got home and transferred the RAW files onto my laptop I was very pleasantly surprised. For a first try the results were very pleasing. I allowed myself to go to town a bit more than usual in Camera RAW, making quite extreme adjustments to exposure, contrast and colour. I also did some black and white conversions in Photoshop which gave the images quite a different feel from the colour versions. You can judge the results for yourself in the Waveforms gallery.

When we got back to Melbourne the experimental photography wasn’t over. My brother-in-law told me that a ‘blood moon' was anticipated on the night of 4 April, caused by a lunar eclipse. We set our gear up on our tripods (mine as follows: Canon 1d mk 4, 100-400mm lens at 400mm, apertures varying between f/8 and f/5.6, ISO varying from 200-800, shutter speeds eventually falling to one second as the moon’s light diminished) and spent a good couple of hours shooting the ever-changing subject at regular intervals, to document the whole process. It really was some spectacle - you could clearly see the reddish moon with the naked eye as the earth’s shadow obliterated it, and with some lightening and sharpening of images in Photoshop the detail was astonishing - I only wish I’d had my 500mm f/4 lens and 1.4x extender with me!

So all in all I had a wonderful time. It was great to see my sister and family, I had some terrific wildlife encounters, learned some new photographic skills, got some shots I’m pleased with - and my back stood up to the stresses and strains. And as I’ve now taken redundancy at work, I’ll have plenty more free time to devote to photography once I’m back in the UK. So, slightly scary - but potentially exciting - times!