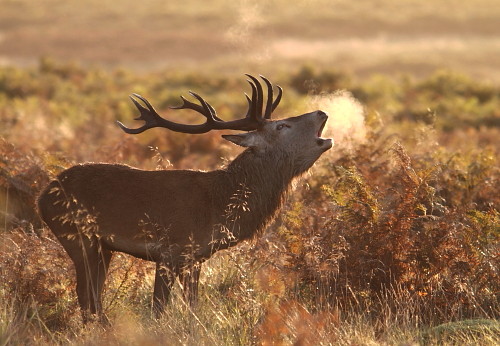 This morning saw me up well before the lark to head once more to Richmond Park to photograph the red deer rut. Not owning a car can be a bit of a pain when you're a wildlife photographer, not least because you have to rely on the UK's public transport system!

All was going well as I boarded the Victoria Line train at 5.50am. But unfortunately once I'd changed onto the District Line at Victoria, things started to go wrong. Due to one of London Underground's frequent signal failures we didn't move for nearly 20 minutes. Any thoughts of getting some silhouette shots of stags against the pink dawn sky were rapidly evaporating!

By the time I entered Richmond Park it was nearly 7.30am, and the sun was just peeping through the trees - a glorious morning was on the horizon (pun intended!). I got some nice shots of a big stag backlit against the pale sky on the crest of a hill. What I was really after though, was a bellowing stag with his breath frosting up in the sunlight.

Down at the rutting ground I'd spent most of my time at this season, all was unusually quiet. After scanning the bracken for some time I finally spotted a pair of antlers belonging to the local dominant stag. However he seemed pretty relaxed - and no sign of any hinds, or for that matter, any other stags. As the light improved, the stag decided it was time to get up and mark his territory. I positioned myself between the sun and the stag, and the moment I was waiting for arrived - he let out a series of thunderous, challenging bellows, each one followed by a big cloud of frosted breath that was picked out wonderfully by the low morning sun - bullseye!

After that things quietened down again. It seems as though most of the posturing, fighting and mating have been completed for this year. The stags can spend the next eleven months regaining their energy, until it starts all over again next October!