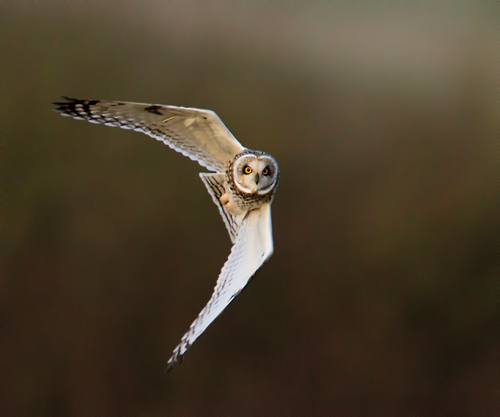 I’ve been struggling with my motivation for wildlife photography in the last six months or so. Since returning from Mull in October I’d only been out with the camera once before Christmas. So my new year’s resolution was to get out and about and rekindle the romance in my relationship with nature!

In late November a friend of mine found a good site for short-eared owls in the east Midlands - some farmland set aside for conservation purposes. After seeing his shots, I was very keen to get up there and hopefully see these wonderful birds at close quarters - with reports of up to 20 owls all hunting and squabbling in a relatively small area. “Shorties” are quite happy to hunt during the day, which makes them a favourite owl species among photographers and bird watchers.

Due to family commitments the first opportunity I got for a visit was the day after new year’s day, which was blessed with clear blue skies and lots of sunshine. Clearly word had got around about this site, as by the time I rolled up shortly before 1pm, there were already about thirty photographers and birders lined up at the side of the field! However, the owls didn’t seem overly perturbed as, after a wait of around an hour and a half, the first owl took to the wing at the back of the field. Within half an hour we had six owls up and about, and flying within 25m or so of the long line of tripods and telephoto lenses. I got some nice shots in great light - though unfortunately I missed opportunities for shots of owls locked in aerial combat, and didn’t see one catch a field vole.

Exposure was potentially tricky as the owls flew low over the ground for the most part, and so the background was field, hedge or treeline rather than sky. This meant that it was risky to shoot on aperture priority as the metering would adjust for a dark hedge, thereby overexposing the paler owl. The answer was to shoot in manual, which ensured I was exposing for the owl rather than the background. It meant however that I had to be alive to the changing light conditions, and increase the ISO or reduce the shutter speed accordingly.

I’ve managed another two visits since then, and got a good range of shots – including the elusive field vole in the talons shot I was after. I did manage to get shots of an owl scrap as well, but alas too far away not to have to crop substantially. All in all a great start to the year though.