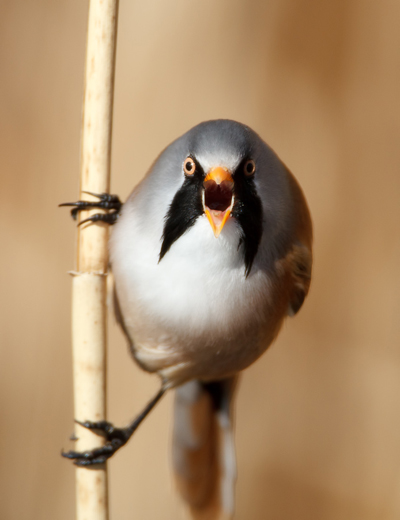 One of the things that I find most inspiring about wildlife photography is the sheer variety of subjects on offer. And as ever, a new year has got me thinking about new species to photograph. Hand in hand with shooting any new species is learning how it behaves - it's a great way to broaden your knowledge, understanding and appreciation of the natural world. So last weekend's glorious weather led to a memorable encounter and some invaluable knowledge of an endearing little bird gained.

My new friend Barry Jackson put me onto a good location for bearded tits (or bearded reedlings as they are now officially known, since they don't belong to the tit family) - Rainham Marshes RSPB reserve in Essex. I'd been to Rainham once before, about two years ago, but hadn't been back since. But this time, armed with some invaluable local knowledge - and a much bigger lens - was to prove more rewarding.

As soon as I left the visitor centre I saw a small crowd had gathered not far away to see the current star attractions - a pair of bearded tits. I learned that nine of these little birds had arrived for the winter, but seven have since moved on. However this solitary pair seemed to like it at Rainham, and were particularly obliging - going about their business in the reed mace along the fleet with a distinct lack of inhibitions. The male, with his Merv Hughes moustache, was grabbing most of the attention! I managed to get some decent record shots, though it was tricky to get a nice clean background with all of those reed stems in the way.

Later on, with the glorious sunshine persisting, the beardies treated the crowd that had gathered on the bridge to some brilliant close-up views - coming so near that my 500mm lens wouldn't focus on them as they were closer than the minimum focusing distance! They then disappeared into the thick reeds, so the crowd dispersed. I decided to hang around, hoping for another appearance - and boy was I rewarded for my patience. The male hopped into full view, perched on a solitary reed stem no more than 15 feet away, and began to sing directly at my camera. I'm pretty pleased with the result!