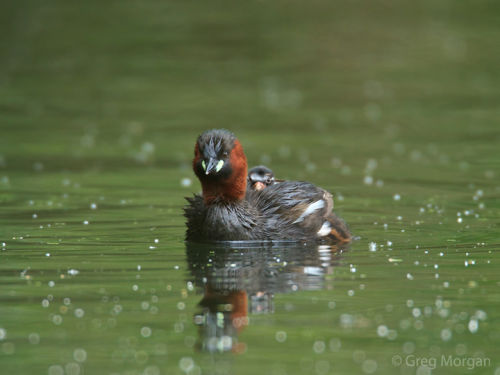 May is my favourite month for watching and photographing wildlife. There's so much going on, with many bird species preoccupied with building nests, brooding eggs and feeding young. You often get great opportunities to take behaviour shots.

I've been spending a lot of time down at my local patch - Walthamstow Reservoirs in east London - recently. Regulars such as reed warblers and little egrets are back, as well as less common visitors such as wheatear. The pair of kestrels that have nested in an old tree for the last three years are also back at their usual nesting site, and I'm looking forward to seeing the young fledge once more. I even saw a fox cub for the first time in a couple of years!

While I was waiting for the kestrels to put in an appearance I discovered a little grebe nest. Now little grebes are one of those species that I find incredibly difficult to photograph - they are small, nervous, and apt to dive underwater as soon as you get within 50 metres of them! So I was very excited to find an adult sitting on the nest with two very small chicks. As I slowly and quietly manoeuvred myself into the best position (unfortunately in a bed of thorns and thistles!), the adult slipped off the nest and into the bushes overhanging the water, remaining just a few feet behind the nest. It soon returned once it realised I wasn't a threat, and then its partner appeared with food for the youngsters - what a lovely sight!

Over the next week or so I visited the nest almost every day, often for just half an hour before work. By day three, two more chicks had hatched and the parents were as busy as anything catching small fish and insect larva to satisfy the demands of their growing brood. Getting good shots was hard, as the nest was situated amongst lots of overhanging bushes and the chicks rarely ventured into the open water. I was after shots of the adults carrying the chicks on their backs, out in the open - and eventually, once the parents had gained confidence, I got the shots I was after. I was pretty chuffed after putting in quite a bit of time and effort, and it was a real privilege to observe the tiny chicks' first few days of life.